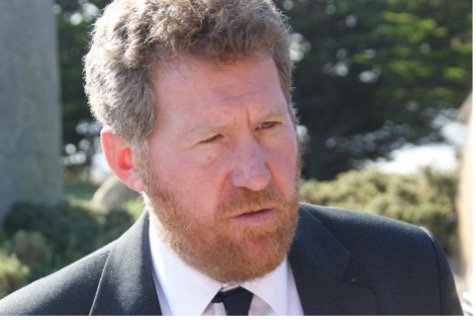 Michael Kingston, based in London and Co Cork, is an Irish lawyer from Goleen, Co Cork, Ireland, and comes from a long family history of fishing and merchant seafaring.  He is the 2014 – 2015 Lloyd’s List Global Maritime Lawyer of the Year for his contribution to the safety of life at sea, particularly in the Polar regions in relation to risk and regulation as the Polar Code was being finalized. Michael represented the International Union of Marine Insurance (IUMI) on the IMO’s world delegation Correspondence Group in the final stages of the development of the ‘ice regime’ that guides limitation for operation in ice, following his earlier work on specialist insurers, Lloyd’s of London’s Arctic Report.

He worked with the US Government during their Arctic Council Chairmanship and in July 2015 received the US Coastguard Challenge Coin for his efforts to promote maritime safety by raising awareness about the IMO Polar Code.

In Stockholm in February 2016 Michael presented to the Arctic Council’s Protection of the Arctic Marine Environment Working Group (PAME) on the need for a Best Practices Information Forum to achieve universal understanding for navigational inputs in Arctic Operations. It was unanimously agreed to build the forum and Michael worked with PAME’s Shipping Expert Group and presented the final proposal in Portland, Maine in September 2016. Terms of Reference were approved by PAME and included in their 2017 – 2019 Work Plan declared at the Ministerial Summit in Fairbanks, Alaska on 11th May 2017. The Forum is a collaboration with industry of all the key decision makers in the regulatory process and runs the publicly available web portal to achieve these aims by collecting relevant information in one place. The first Forum met in London, UK on 5th & 6th June 2017, the second Forum on 14th & 15th May 2018 when the Forum’s Web Portal for the Implementation of the Polar Code www.arcticshippingforum.is was launched. Michael is a key member of the Forum’s Organising Team as a Special Advisor to PAME, working closely with the United States, and is currently involved in organising the 5th Forum. For further reading about this topic see Riviera Media’s special publication ‘Decoding the Polar Code’.

Michael also works as an IMO Consultant on Polar issues and fishing vessel safety / IUU Fishing and has been a key member of IMO’s team concerning the 2012 Cape Town Agreement for the Safety of Fishing Vessels in recent years.

Michael has advised several governments and international organizations, most recently advising Iceland in their Delegation at IMO’s III meeting, 12th – 16th July 2021. Michael also represents Iceland on the ‘informal group of interested parties established under the coordination of Spain to develop draft guidance to assist competent authorities in the implementation of the 2012 Cape Town Agreement, and he represents the IMO on PAME’s 2021-2023 project led by Iceland, Spain, and IMO ‘Raising awareness in the Arctic Council of the provisions of the 2012 Cape Town Agreement.