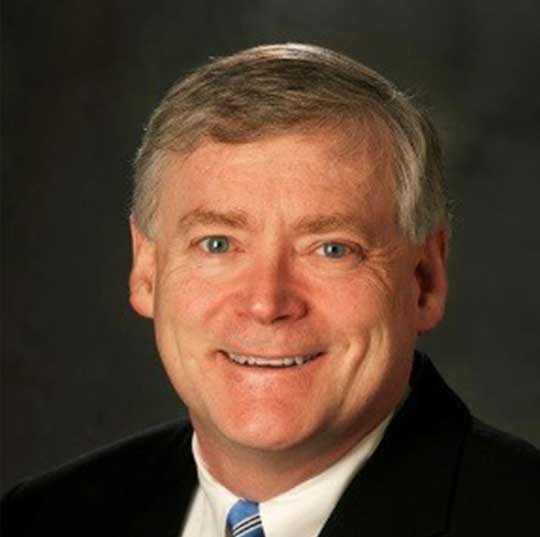 Mead Treadwell was the 11th Lieutenant Governor of Alaska (2010-2014) and Chair of the US Arctic Research Commission (2006-2010) under Presidents George W Bush and Barack Obama. In those positions, he helped develop and implement the U.S. Arctic policy adopted in 2009, expanded Asian observer participation in the Arctic Council, and funded and advanced the eight-nation Arctic Marine Shipping Assessment, which set a blueprint for marine safety and reliability in the newly-accessible Arctic Ocean.

In advancing Arctic cooperation and sustainable development, he chairs the satellite firm Iridium’s Polar Advisory Board, co-chairs the Washington, DC based Woodrow Wilson Center’s Polar Initiative, chairs the Iceland-based Arctic Circle’s Mission Council on Shipping and Ports, and is a member of the International Advisory Board of the UK-based Polar Research and Policy Initiative.

He is a frequent speaker in academic and military settings regarding Arctic economic and security issues. He was also a member of the World Economic Forum’s Global Agenda Council on the Arctic that prepared the Arctic Investment Protocol: Guidelines for Responsible Investment in the Arctic. In business, he is principal at Treadwell Development, a investment and advisory firm helping to establish Arctic infrastructure projects in energy and transportation. He served as President of Pt Capital, the world’s first Arctic-focused private equity fund, with investments in hotels, telecommunications and other service industries in Alaska, Iceland and Finland, and advisory activity across the Arctic. He is the Founder and CEO of Venture Ad Astra, an Anchorage-based company which invests in and develops new geospatial and imaging technologies, including Immersive Media which pioneered StreetView for Google. He is also one of the founders of Digimarc, a NASDAQ-listed firm whose digital watermarking system is used to provide anti-counterfeiting protection on currencies and helps provide copyright protection on DVDs. He serves on the board of Ryan Air, an Alaska based cargo airline. He helped found and develop natural gas pipeline and telecommunications ventures in Alaska sold to global public firms. Early in his civic career, Treadwell served as the city of Cordova’s Director of Oil Spill Response in the wake of the 1989 Exxon Valdez oil spill and is a co-founder of the Prince William Sound Science Center. He was appointed to serve as Deputy Commissioner of the Alaska Department of Environmental Conservation under Gov. Wally Hickel, where he helped form the Northern Forum, joined U.S. delegations on the Arctic Environmental Protection Strategy, precursor to the Arctic Council.

In the late 1980’s, he established the Alaska State Chamber’s Siberia Alaska Gateway Project, which worked to open the US-Russian border with the 1988 Friendship Flight and follow-on exchanges in 1988 and 1989. While Lt. Governor of Alaska, he was Chair of the Aerospace States Association, and led the development of model state-based safety and privacy rules for UAVs. He was Managing Director and later a Senior Fellow of the Institute of the North, where — with the Independent Working Group on Missile Defense — he helped bring about the U.S. Missile defense system in Alaska and advanced state-level participation in US security issues. Treadwell received his BA from Yale University and his MBA from Harvard Business School. He is winner of the Alaska SeaLife Center’s Walter J. Hickel Ocean Leadership Award, the Northern Forum Walter J. Hickel Medal, the Alaska Outdoor Council’s Sydney Huntington Award, the Foreign Minister’s Commendation of Japan, and the Blethen Award, Top Prize for Investigative Reporting in the Pacific Northwest. He is Chapter Chair of the North Pacific Alaska chapter of the Explorers Club.